A cinematic journey to one of the most remote places on the planet, Tibet: Land of the Brave transports the audience into the everyday lives of Tibetan herders, seen through the eyes of Gyamtso, Marijo and their daughter, Yangchen. Following this Tibetan-Canadian couple, who are expecting their second child in Tibet’s snowy mountains, Tibet: Land of the Brave explores how China’s radical turn toward a market economy has devastating effects on the nomadic lifestyle.

Gyamtso Sotse lives in Canada with his wife, Marijo Demers, a young Quebecker passionate about the Tibetan language and culture. Gyamtso left his native Tibet in 1992, but has not been back in the past thirteen years. With a Canadian passport in hand, he sets out to rediscover for himself and to introduce his wife and daughter to his
ancestral heritage without fear of reprisal from the Chinese authorities.

Gyamtso’s community in Tibet have raised yaks for generations and have managed to preserve a nomadic existence for thousands of years. For the young family, the journey is an opportunity to immerse themselves in the local customs and daily tasks, which little Yangchen seems to have no problem with.

Herding yaks, preparing food and crafting wool by hand form the daily routine of Tibetan nomads. Yet to maintain this mode of existence the nomads must fight a daily struggle against China’s rapid modernization which threatens to sweep their traditions aside. Filmed over several years, this documentary is a witness to the effect of China’s sedentarization policies on the nomadic life.

Through the experiences and culture shock of a Westerner, a Tibetan and their daughter, Tibet: Land of the Brave looks at the daily life of Tibetans in China and exposes the dangers threatening their traditional existence. 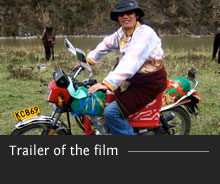